skip to main | skip to sidebar

We have a Cover Girl on SasserFrass Hill 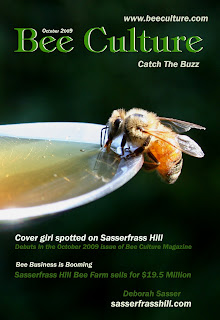 Some of you may know already... But I will tell you again.
A few weeks ago I took a spoonful of honey and went into my bee yard. I chased bees around until I got one of the girls to stop for a taste.

I started taking photos, lots and lots of photos... I downloaded them into my computer. I had one that caught my eye so I decided to send it over to Kim Flottum, the editor of Bee Culture magazine.

I ask if they accepted freelance photography, adding, jokingly, that I'd always wanted to be on the cover of the Rolling Stone…(an old 70s song by Dr Hook)… . If not The Rolling Stone, I would love to make the cover of Bee Culture magazine.
He emailed back saying "Nice photo"…. But for the cover the image need more headroom for the title and a more vertical shot. If I could take a shot that good, with the format he needed maybe even Rolling Stone would want it.
Soooooo… I went back into PhotoShop. I re-cropped the shot; I even added the magazine title and sent it back and ask…what about this?
He answered; can you have it back to me by tomorrow? I want to use it on the October cover. I was so excited! This October? was my response. I had no idea in just a few week I would see a Sasserfrass Hill girl on the cover of a National magazine !
He gave me the format he needed. I got the photo to him in a few hours. The production coordinator- Kathy Summers emailed and said my photo had made their deadline and would defiantly be on the October 2009 cover of Bee Culture.
So keep your eye out for the Sasserfrass Hill cover girl making her debut on the cover of October issue of Bee Culture magazine.

Check out my mock up of the cover....I also believe in positive affirmations....
Bee Well,
Ms. Deb
Posted by Sasserfrass Hill at 7:49 PM No comments:

Labels: How we got the Cover of Bee Culture 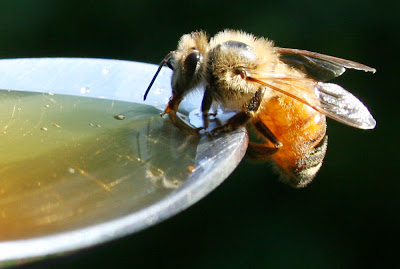 I can hardly bee-lieve it, I sent in a photograph of one of my girls drinking honey from a spoon to Bee Culture magazine. They are a national Bee Keepers publication. They are going to use my photograph for the cover of their magazine in October 2009. I am beyond stoked.!!!

I took lots and lots of photos before I got this shot.... but it turned out so beautiful..... I love it..
Bee Creative,
Ms Deb

Posted by Sasserfrass Hill at 8:16 PM No comments: